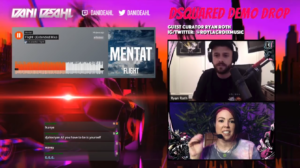 My new single Flight was featured on Dani Deahl’s Demo Drop on her Twitch channel, where she and Ryan Roth gave a really positive review.

“This song is so in my brain I can’t even form complete sentences.”

“I like that it took a minute for me to be converted.  … When it got to that minute point we both just shut up. We both looked away from the screen too.”

It took some time for the track to grow on Dani and Ryan, but as it built up they became increasingly enthusiastic. They were really into the progressively building melodies and atmospheres, and commented that as the track built up slowly, but always changing, it become more compelling.

Thanks to Dani and Ryan for their feedback and for sharing the music.

You can watch the replay over on Dani’s Twitch channel here.